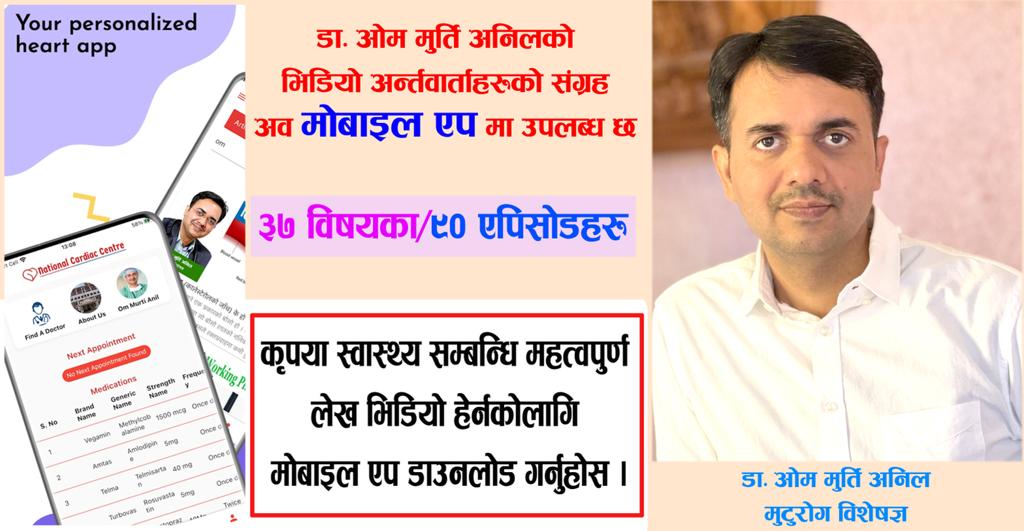 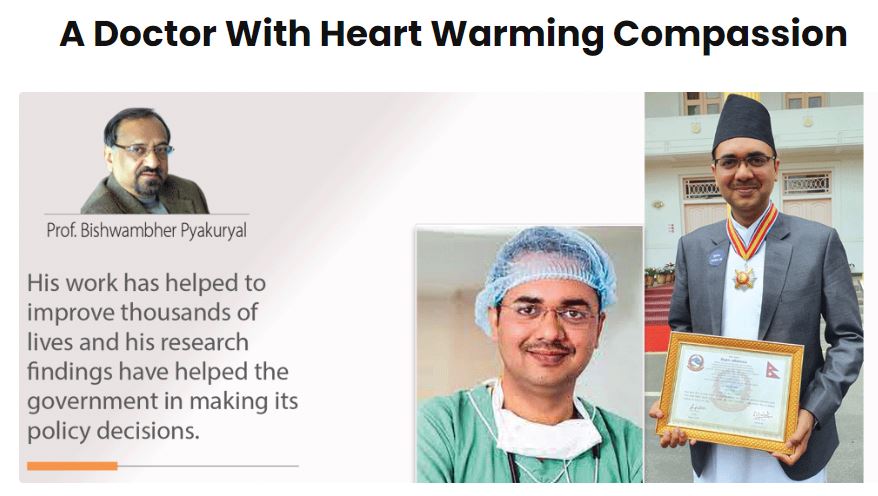 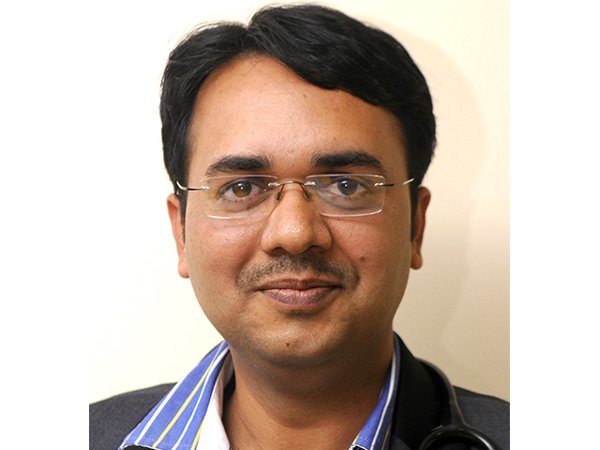 Today I am writing about a young guy, I met for my treatment in 2011 at Manmohan cardiothoracic Centre. I met him with so many doubts, uncertainty, and worries in my mind since my case was a bit complicated, but the young guy answered every question in such a way that, I chose him as my doctor for my entire life.

He is now a popular celebrity of Nepal, whom many of you know as a health motivator, advisor, social worker, writer, researcher, or spiritual guide, and he is Dr. Om Murti Anil. He is a skilled cardiologist trained from a prestigious institution in Asia, AIIMS.

I have closely witnessed his journey from the beginning of his cardiology carrier from Manmohan to National Cardiac Centre, not only as his patient but also as a guide and well-wisher. I remember, when I used to visit him, after finishing his role as a doctor, he used to show me his articles, banners, and posters prepared by him for public awareness, with great emotions. I am short of words to explain his enthusiasm and devotion to the prevention of heart disease right from the beginning of his career in 2011. And it has continued, perhaps with greater intensity till now.

One day in 2012, when I had gone for a follow-up, he got excited after seeing my ECG. I curiously asked him, everything alright doc? He smiled at me as if something like a miracle has happened. During our conversation, he revealed, my heart rhythm had been regular with his medications after a long time, which was sort of uncommon occurrence in his knowledge. That event clearly demonstrated his attachment to patients and passion for his profession.

I have participated with him in so many events organised by solely his effort for public awareness like World No Tobacco Day, World Heart Day, World hypertension day, etc. The biggest event which I always recall was his research on the prevalence of cardiovascular risk factors in an urban population of Kathmandu valley in 2014 on the occasion of World Heart Day.

Dr. Murti has conducted one of the largest research in Nepal by accommodating 5530 young adults in an urban area, the results of which had been made public during the dissemination seminar. This was self-funded research that was approved by Nepal Health Research Council and WHO.

I had spoken at the opening ceremony along with WHO representative Lin Aung at Maharjgunj. I had seen Dr. Om's passion, hard work, and selflessness toward his mission of serving people and heart disease prevention.  I have seen him working tirelessly without any desire for publicity and financial gains. Rather, by using his contacts to a little extent, he had used his money for such activities as stated above.

Another noticeable event was in 2013 when his book Ma Pani Doctor was inaugurated by the then-president of Nepal Dr. Ram Baran Yadav. President had so much to tell about his book and its author.  This book was solely meant to increase awareness of the general public towards heart disease and its prevention. Dr. Om was recently married at that time, and I still remember his words " I want to say sorry to my wife because I had used those precious 1 year time to write this book, which was supposed to be spent with her". So much passion, dedication, and hard work, I have rarely encountered with any other professional throughout my career, which I have also mentioned in my autobiography ‘Afailai Khojda’ .

He has recently founded National Cardiac Centre in Kathmandu. He had shared about it long back. "Sir, I want to establish a cardiac centre that will establish a standard of cardiac care in the country". I have visited there a few times. As per expectation, one can easily feel the difference between any medical center in Nepal and that led by him.

Dr. Anil's academic profile justifies that he is most personable and empathetic to the concerns of the patients who visit him. Dr. Anil has received Nepal Bidhyabhushan Padak and Suprabal Jansewa's third honour from the president of Nepal. He is the gold medalist in Medicine from the Institute of medicine.

Dr. Om Murti's strength lies in communicating clearly and concisely what is happening to his patient. At the hospital and clinic, he works with a multidisciplinary team and passes on to them accurately the state of his patient's health which encourages the team for taking necessary steps to enhance the health safety of the patients.

A healthy population is critical for the prosperity of a nation. In Nepal, poor health has led to absenteeism, decreased productivity, and conversely, increased healthcare costs. The investment made by Dr. Anil in the prevention of heart disease may have a huge socio-economic impact on the country.

With all these, he is a genuine gentleman and humble human being. He has huge respect for others as well as his patients. If someone spends time with him, will definitely be impressed with his simple approach and thoughts.

At times when the patients show their unwillingness to divulge necessary information because of the language barriers and a host of other reasons, the maturity of the doctor comes into the picture. Dr. Anil is exceptionally intelligent in such a situation extracting and imparting information to such patients to their advantage. A rare quality the doctor should have is except being scientifically brilliant to treat the patient, he should have compassion. This is the added quality that Dr. Anil possesses.

Dr. Anil's awareness creation through social media has been quite popular in Nepal and abroad. I am one of his 1.2 million followers on his  Facebook page (www.facebook.com/drommurti). I am very much sure that his videos and medical information have reached every household in Nepal and have contributed enormously to changing lifestyles and disease prevention.

Dr. Anil's contributions to the field of cardiovascular medicine are incredible. It is outstanding and truly innovative. His work has helped to improve thousands of lives and his research findings have helped the government in making its policy decisions. This is the reason why Dr. Anil's work is so important and therefore it has been duly acknowledged and widely appreciated

To sum up, Dr. Om is a rare combination of qualities that country has got as a sincere citizen.